Alpheus Williams Chittenden was born in Detroit on Feb. 24, 1869 to William J. and Irene (Williams) Chittenden. He graduated from Detroit High School and the Massachusetts Institute of Technology, and he also attended the Hochschule in Charlottenburg, Germany. He entered the architectural practice in his late 20s, beginning practice in Detroit in 1898. One of his first jobs was the cafe of the Russell House, a Detroit institution. In 1903, he teamed up with Charles Kotting to form the firm Chittenden & Kotting. The pair did mostly residential work in Detroit, including a number of prestigious homes in Indian Village and the Grosse Pointes. The firm also did a number of Detroit firehouses. Chittenden is credited with the Detroit Boat Club on Belle Isle and the Detroit Stove Works plant. Chittenden died May 3, 1958. He was 89 years old.

Alpheus Williams Chittenden was born in a house at 70 Fort St. in Detroit, where the Theodore J. Levin U.S. Courthouse stands today, on Feb. 24, 1869, to William J. and Irene Williams Chittenden. He was a grandson of Gen. Alpheus Starkey Williams, who served in the Civil War, was later a congressman, and was a founder of the Detroit Boat Club.

Alpheus, also known as “Alf” when he was younger, was the second child of five. The family spent much of their summers in their summer home at the end of Nosegay Lane on Sankaty Bluff in Siasconset, Nantucket, Mass. He graduated from Detroit High School and the Massachusetts Institute of Technology (MIT) in the late 1880s.

On July 6, 1889, Chittenden sailed from Boston to Europe to attend the Technische Hochschule Charlottenburg in Charlottenburg, Germany, near Berlin. The school is known today as the Technische Universität Berlin, or the Technical University of Berlin. He spent two years traveling Europe for his studies, gaining inspiration that would later influence his work.

Chittenden left Germany on June 24, 1891, on the German Lloyd steamer Havel. The Free Press reported upon his return that, after his two years studying abroad, Chittenden was “making fine progress and showing that he had chosen wisely in his calling.”

He began his architectural practice in his late 20s, officially beginning his practice in Detroit in 1898, however, his earliest known commission was an 1895 addition of a cafe inside the Russell House, of which his father, William Chittenden, was the proprietor.

William Chittenden had been the proprietor at the Russell House since 1864. In July 1895, he had bought out the interest of his business partner, L.A. McCreary, when McCreary wished to retire. Chittenden announced that he would make $50,000 worth of improvements to the building, making arrangements with the Clark estate, owners of the property, which called for the building to be entirely remodeled into an “essentially modern hotel.” Improvements included a new steam heating system, complete electric plant, additional bathrooms, and a cafe along Cadillac Square. The interior would be redecorated “in an artistic manner.”

The Clark estate was impressed by the young Chittenden’s design and execution of the new cafe, which would lead to his next major commission.

On Oct. 7, 1897, a massive fire ripped through the old Detroit Opera House, located on Campus Martius. The Opera House, like the Russell House, was owned by the Clark estate.

Just under two weeks after the fire, the Clark estate announced that they had selected Alpheus Chittenden to design the interior of the new Opera House, well over a month and a half before the architects had been chosen for the rest of the building’s design. The famed Detroit firm of Mason & Rice was selected to design the exterior and office portion of the building and well-known theatre architect Col. J. M. Wood of Newark, New Jersey designed the interior floor plans and structure.

The interiors were designed in a Francis I style, the designs of which were “strictly original.” Chittenden used “exquisite color combinations,” with the auditorium featuring tapestried chairs in a brilliant red, contrasting a plain French grey drop curtain with red fleur de lis that was made of asbestos for added fireproofing. The lobby and entrance was lined in a dull green tile with green leather doors.

These early interior designs of Chittenden resonated with Detroiters, leading to many of his early commissions. Of his early work, well over half of his commissions were solely interior designs and remodels. These included the remodel of the Grosse Pointe Club for the Country Club of Detroit (1898), the mayor’s office in the Old City Hall (1898), a remodel of the Detroit Club (1899), along with several storefronts.

His earliest known commission to design a building was in 1899, when Mrs. Mary G. Harris hired him to design her a home at 771 Seminole in Detroit’s Indian Village neighborhood.

In 1901, he was awarded perhaps his best known standing commission: the new clubhouse for the Detroit Boat Club on Belle Isle. The structure would be completed in 1902.

After working on his own for seven years, Chittenden teamed up with local architect Charles Kotting in 1903 to form Chittenden & Kotting. The duo would design roughly 80 known projects together over the course of their 14-year partnership, moving between offices in the Ford, Dime and Penobscot buildings. They stuck to mostly residential design, with the majority of their commissions being in Indian Village, however, they also designed several homes in Boston Edison, Grosse Pointe and Bloomfield Hills.

The Detroit Fire Department tapped them to design a series of firehouses, which Charles Kotting would continue to design after the firm was dissolved in 1917. The duo also designed the clubhouse for the Bloomfield Hills Country Club in 1915, which was said to have been the largest clubhouse in the state. Among their few industrial commissions was the Wayne Automobile Co. plant on Piquette (1905-1906) and several additions to the Detroit Stove Works. One of their last known commissions was a farm house for Detroiter Emory W. Clark on a property he purchased in Pontiac, which was constructed between 1917 and 1918.

Chittenden lived with his family at 70 W. Fort St. until the house was purchased in the mid-1880s in order to make way for the construction of the Federal Building. The family then moved several blocks away, to a home at 134 W. Fort St. By 1909, Chittenden had constructed a large 15-room home on a 40-acre plot off Woodward Avenue in Bloomfield Hills named Brae Burn.

He was the secretary for the Michigan Chapter of the American Institute of Architects for several years. He was also a member of the Architectural League of America, Detroit Chamber of Commerce, Detroit Club, Detroit Boat Club, Country Club of Detroit, Detroit Athletic Club, University Club and the Drama League of America.

In late February 1917, Chittenden joined his sister Mary and her husband, William T. Barbour, on a trip to Colorado Springs, Colo. He soon purchased a house in the city’s Broadmoor neighborhood and originally planned to stay there for the winter, but ended up moving there permanently for the rest of his life. His sister, Minnie Chittenden Newman, moved in with him in 1924, living with him up until a few months before she died in 1929 at the age of 58. His nephew Henry Newman III also lived with him from time to time. Until 1923, he still owned his home in Bloomfield Hills, staying there when he came to visit Detroit or renting it out as a summer home to other Detroiters. In May 1923, he sold Brae Burn to Mr. and Mrs. Joseph H. Hunter. The home would eventually be demolished for a senior living center in the early 1960s. He frequently visited his family in Detroit, often spending weeks or months at a time in the city.

He traveled a lot after he left Detroit, visiting Egypt in 1928. In Colorado Springs, he was active with the arts, helping with exhibitions at their Art Center. He was also an active parishioner at Grace Church in Colorado Springs. It is believed that he stopped practicing as an architect in 1917.

Chittenden never married. He died in Colorado Springs on May 3, 1958, at the age of 89. He was buried with his family in Detroit’s Woodlawn Cemetery, and was survived by his sister, Mary Chittenden Barbour, and several nieces and nephews.

1907 W. B. Wesson Residence, just of Jefferson on Seyburn

1912 Hammond Building - Remodel of basement to be occupied as a cafe for N. B. Sharpe 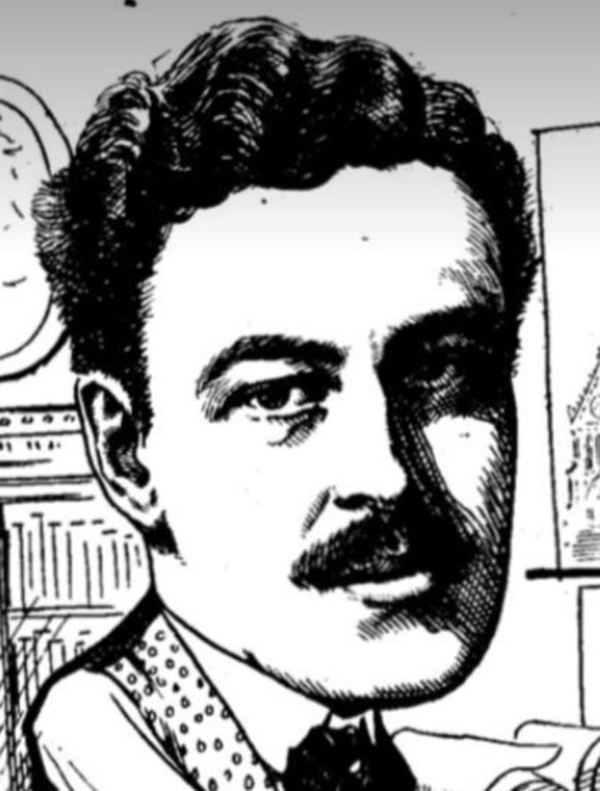