By JENNIFER BAROSS for HistoricDetroit.org

So is the story of Corrado Parducci – more commonly known as simply Joe.

Parducci was an architectural sculptor – an artist, whose architectural ornamentation has adorned Detroit’s buildings for more than 80 years, though none of it was signed or marked in anyway. Parducci's story is a fascinating tale of a humble young artist whose talents took off during Detroit’s building boom of the 1920s. The leading architectural firms sought him for their most exclusive projects. In his first year in Detroit, in 1924, Parducci indicated he produced $56,000 worth of work. That translates to more than $750,000 today, when adjusted for inflation.

Parducci was born March 19, 1900, in the Italian mountain village of Buti, about 9 miles from Pisa. As the middle child of 13, he traveled with his father to America when he was 4 years old. Once settling in New York City, Parducci’s father found work as a grocer. Finding working and managing a 4-year-old difficult, his father placed the boy in a Catholic orphanage. The remainder of the Parducci family – his mother and siblings – joined them about 18 months later.

The family remained in the MacDougal Alley area of Manhattan. This area had been a great cultivator of sculpture and art, and also was where keen instructors began to pick up on Parducci’s artistic talent when he was about 8 or 9 years old. At the time, local philanthropist Mrs. Harry Payne Whitney, who herself was a sculptor and had a studio in the area, created programs for the local children. Parducci was enrolled in one of these sculpture programs.

At age 15, Parducci quickly rose from student to working directly with the top architectural sculpture firms in New York City. His employers, Ulysses Ricci and Thomas DiLorenzo, specialized in figures and ornamentation, respectively. One could say he had the best of both ends of the spectrum to learn from. But Parducci leaned toward the figures, or sculpture, rather than ornamentation of decorative painting, which became a great fit for the pair. It was while working with DiLorenzo’s firm that he was introduced to Albert Kahn. Kahn began to send work to DiLorenzo specifically for Parducci to accomplish, and soon started trusting him to even inspect work by others. Kahn quickly convinced DiLorenzo to send Parducci to Detroit so he could work on a project. That was in 1924, and what was to be a short two-month stay became a lifelong and lucrative venture for Parducci, with more than 600 commissions in his job book.

His skill had grown to the point where he was rivaling his masters. He could create pieces from a wide variety of classical movements and, although always Parducci originals, each fit the building style determined by the architect.

Parducci’s work has graced the most notable buildings in Detroit, including the Penobscot, Guardian and David Stott buildings; family homes of auto barons Edsel and Eleanor Ford; the Wilson Estate, Meadowbrook Hall, in Rochester, Mich.; and the Music Hall and Players Club theatres – only to name a few. By far, one of Parducci’s greatest achievements is the interior of Detroit’s Masonic Temple.

Occasionally, work came directly from the client, but mostly straight from the architect. Many times, the architect or their designer (assistant) would bring architectural drawings to Parducci and discuss a general idea of what they would like in a “blank space” within their plans, while the building would suggest the style. Parducci would “immerse myself in a period. And then under that trance, or under that influence, I could work in that.”

In March 1975, Dennis Barrie interviewed Parducci for the Smithsonian Archives of American Art. During the interview, Parducci reminisced of the process of working with architects. He told Barrie, “See, this is the way a job is usually presented. Now I get this, and this Gerald Diehl calls me up at house. He said, “I got a little work. Would you be interested in doing it?” And so he mails me this and wants an estimate. These are nine different panels, see. That’s as far as that.” This type of relationship with Diehl was more common, where Parducci was permitted to be creative and add his artistic talent to the building. Few architects were so specific in their ideation and would have detailed specifications drawn for Parducci to work from.

Parducci’s relationship with Kahn was such. Parducci describes Kahn wanting to keep the design to his own ideation. He commented, “He’d separate the cost of the modeling from the contract. He’d have an allowance. Then he’d call me in and tell me what he was dreaming about or what he would like, what preferences. We’d have a meeting about it, and then I would proceed to develop on that theme.”

Parducci enjoyed the professional relationship with the architect’s designers, and it is suspected that Parducci somewhat equated that rapport with his instructors at his school in New York, where critique and learning was a daily occurrence. He told Barrie, “Their ideas rubbed off on me, as well as my ideas rubbed off on them, because they would consult me as I would consult them. We worked together as a team.”

Once the depression hit in 1929, most of the Detroit building projects dried up, and Parducci’s line of work changed from skyscrapers and mansions to churches. Although they had a “gentleman’s struggle of prelate and artist”, he became a favorite of Cardinal Edward Mooney of the Archdiocese of Detroit. Because of this, he worked on many of the churches within the metropolitan Detroit area from the 1930s to the late 1970s.

Parducci worked in his Detroit studio, on Sibley near Cass, every day until just before his death on Nov. 22, 1981. His legacy lives on not only within the buildings in which his contributions continue to stand, but also as more and more is discovered and shared about him. 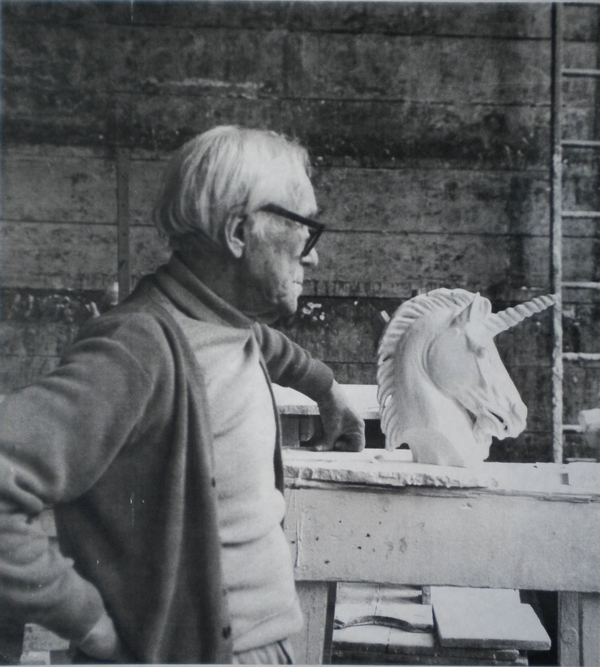