The Ariel was one of a number of small ferries that shuttled Detroiters up and down the Detroit River.

The 95-foot wooden-hulled passenger ferry was built in 1881 in Detroit at the shipyard of John and Walter Oades for Hiram Smith of the Walkerville and Detroit Ferry Co. She was completed and her first enrollment issued at Detroit on Dec. 17, 1881, likely entering service the following spring after the frozen river thawed. The Ariel mostly ran between downtown and Belle Isle and downtown and Walkerville, Ontario, in the era before the Ambassador Bridge and Detroit-Windsor Tunnel.

She was sold to the State of Michigan Highway Department in 1922, the first vessel acquired for the State’s newly established service across the Straits of Mackinac. She would be rebuilt to accommodate up to 20 automobiles, drastically altering her appearance. As part of the considerable makeover, the ship’s hull was sheathed in iron to reduce ice damage in the Straits during chillier months. State car ferry service began July 31, 1923, however, the Ariel was quickly deemed too small for the busy Straits of Mackinac runs and was taken out of service after her first year.

She was then sold in 1926 to the Port Huron & Sarnia Ferry Co. for passenger and auto ferrying service across the St. Clair River between Port Huron, Mich., and Sarnia, Ontario.

In 1936, she was acquired by the State Bridge Commission, which was building the first Blue Water Bridge. However, once the bridge was completed in 1938, the Ariel was laid up at Port Huron until 1944. She was then towed to Detroit and laid up at various locations. During a freezing rain storm in February 1948, the Ariel took on ice and water and then capsized and sank in high winds. She was later raised and sold for scrap and broken up at its moorings. 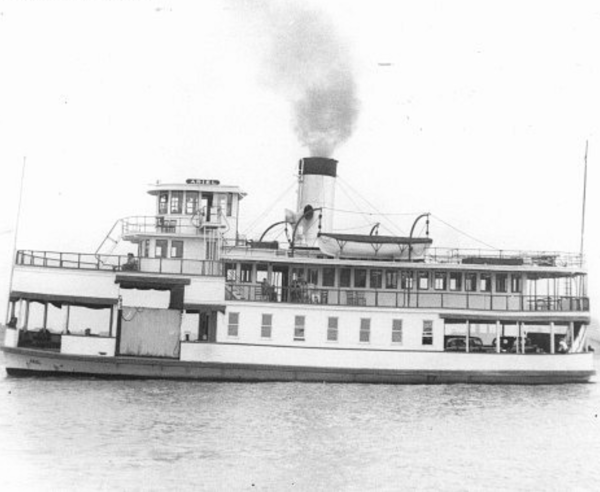