When Detroit's east side Greek community abandoned the city, the left behind a church that was once the heart of the neighborhood.

Detroit saw a large increase of immigrants from Greece in the late 19th century, many fleeing economic woes that followed the country's war for independence that raged from 1821 to 1832. Many settled in the area today known as Greektown, though the area was previously home to a number of German immigrants, and was known as the German Quarter. With the growing number of Greek immigrants in Detroit, the State of Michigan issued a charter for the Evangelismos Theotokou Greek Orthodox Church on March 25, 1910. This was the first Greek Orthodox Church in the state, and the parish is today known as the Annunciation Greek Orthodox Cathedral. The church was located on Macomb Street in the heart of Greektown. But as the 1920s were coming to a close, many members of the Greek community had moved further out into the eastern neighborhoods and physically away from the church.

Many of them settled on the east side, and they needed a neighborhood school and church. In 1928, conversations gained steam, and fund-raising efforts began. In the meantime, in 1929, members of the Greek community rented an old wooden saloon on the corner of Hillger and Kercheval to fill their needs. Thirty-five families enrolled their kids at the Socrates School. The first church council established the Assumption Greek Orthodox Church in 1930, and chose the name Koimisis Tis Theotokou (Assumption of the Blessed Virgin). In 1931, the church and school relocated to the second floor of the International Odd Fellows Hall on Hart Street, just south of East Jefferson.

Fund-raising efforts continued, albeit they were slowed during the Depression, and land at the corner of Beniteau and Vernor Highway was purchased. By spring 1933, the church had raised enough money to build a new home there. This church, designed by George N. Walters, stands at 2504 Beniteau. But over the ensuing decade, the parish soon outgrew the Beniteau church, and in 1946, land two blocks away, on Charlevoix just west of St. Jean, was purchased for a larger church. The Greeks began raising money again. And much like its mother church, Annunciation, the new Assumption of the Theotokos Greek Orthodox Church would be built in phases.

The foundation was laid in October 1948, and the following April saw masonry and above-ground construction started. The tall-but-single-storied church, designed by architect Arthur Greig Jr., opened in 1949. The tower stands about 30 feet, and the church is built from buff-colored brick trimmed in beige stone. It is laid out in a Latin cross formation, with a large dome covered in red clay tiles. Both the dome and its two square towers were originally clad in copper. As an interesting design flourish, the eastern tower stands much taller than the western one.

The old church on Beniteau was turned into a gymnasium and venue for church dances. But, once again, the Greeks raised money for a newer facility, and in 1957, the Assumption Community Center was built next door to the new church on Charlevoix, and joined by a wide concrete sidewalk. The one-story community hall is 60 feet wide by 100 feet long by 14 feet tall.

The Charlevoix Street church saw its iconography completed in 1966 by Stelios Maris, a renowned iconographer from Athens, Greece. These religious images were painted in accordance with the conventions of Byzantine and Orthodox Christian tradition.

However, a year later, the unrest of 1967 in Detroit led to many Greek families moving out of the city. The church moved its offices into rented space in suburban St. Clair Shores, and many Greek families left Detroit, too. By the early 1970s, church leaders decided to abandon Detroit and relocate the parish to St. Clair Shores, as well. They bought 10 acres in 1972, and began construction in 1976.

On May 1, 1977, the final Greek liturgy was conducted at the Charlevoix church. The church complex was sold in the late 1970s to the Apostolic Way Church of God.

The Apostolic Way Church of God branched off from the Clinton Street Greater Bethlehem Temple Church, which itself began in 1919. What began in an open-air tent soon moved into a storefront on Lafayette Boulevard, then to another storefront at 1716 St. Aubin St., a rented living room on Lafayette Street, a tent on Clinton and Rivard Streets, a small storefront at 1466 Monroe St., and eventually the living room of one of the parishioners at 628 Napoleon St.

The congregation was part of the Apostolic Faith that emerged out of a 1901 Pentecostal revival in Kansas that spread across the country. On Dec. 16, 1921, an assistant pastor at an Indianapolis congregation, Elder Samuel Nathan Hancock, arrived in Detroit for a visit that turned into a permanent stay. He was appointed Greater Bethlehem Temple's new pastor, and set out to put an end to the flock's nomadic ways. The congregation moved to a building at St. Antoine and Montcalm streets, but only a year later, the charismatic pastor had helped the congregation grow too large for the building. In 1923, Hancock bought two small houses at 2238 Clinton St.. One house was converted into a church able to hold 159 praying souls; the second was used as a parsonage. But the congregation kept growing, and by 1926, the parsonage was absorbed by the church building in order to boost capacity to 400.

The year 1927 saw Hancock ordained a bishop, and two years later, a new church with room for 1,200 was built at 2254 Clinton St., with the congregation helping to build it. In 1962, the congregation was on the move again, with the congregation buying the Sharey Zedek synagogue at 2900 W. Chicago Blvd at Lawton Street. This synagogue-turned-church encompassed nearly the entire block and had a capacity of 1,800. Hancock died in 1963, which led to several new pastors joining the church, including Eugene Tompkins. It would be Tompkins who would go on to found the Apostolic Way Church of God. He was born in Bullock County, Ala., on Oct. 12, 1931, the seventh of 10 kids. Although raised a Baptist, Hancock and the message of the Apostolic Faith led Tompkins to switch denominations. In 1977, Tompkins and others met at ABC Nursery on Detroit's north side to talk about founding a new church. Later that year, this group started the Apostolic Way Church of God, with many of the first members having formerly attended Clinton Street Greater Bethlehem Temple Church.

With no shortage of closed churches to choose from, the Apostolic Way Church of God settled on the former Assumption Greek Orthodox building on Charlevoix. The newcomers set out to try to lift the struggling neighborhood through outreach programs such as a food pantry and buying properties to offer affordable housing for their new neighbors. Yet, the decline was too severe for one church to overcome, and as the neighborhood continued to decline, so did membership in the church. Then, in 1986, a winter storm severly damaged the church, and with a smaller parish to pitch in for repairs, the building continued to suffer water and structural damage. Finally, in 2008, the church voted to close the main church structure and remodel the hall to serve as its place of worship instead.

Almost immediately, vandals piled onto the damage of the elements. Around 2009, scrappers ripped most of the copper from the dome, which allowed even more water and snow to seep in and cause even greater damage.

By a resolution dated May 5, 2015, the Detroit City Council charged the Historic Designation Advisory Board (HDAB) to create a local historic district in order to further entice redevelopment of the property. It was approved in 2017. Seven years later, however, the church has found no takers, and the building's interior is almost entirely destroyed. 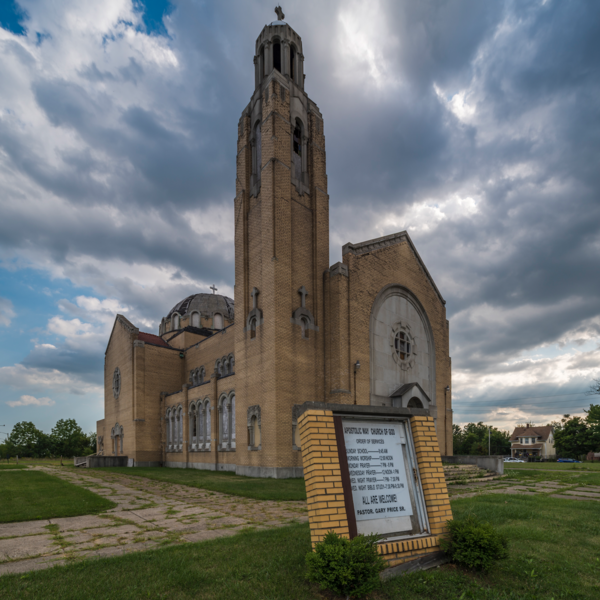