First Unitarian Church was one of the city's oldest churches, opening in 1890 on Woodward Avenue and Edmund Place. It was part of Detroit's Piety Hill district of churches.

The building was designed by the firm Donaldson & Meier in the Romanesque revival style. The church was "remarkable for its severely simple design," William Hawkins Ferry wrote in "The Buildings of Detroit."

The building originally had three round-arched stained-glass windows by the renowned John La Farge, who designed the windows of Trinity Church in Boston. He is considered a master of stained glass, second to perhaps only Louis Comfort Tiffany.

In 1936, the church's front facade was mangled when Woodward Avenue was expanded. The church was soon sold to the Church of Christ, and the Unitarians merged with First Universalist Church to form the First Unitarian-Universalist Church and set up shop at 4605 Cass Ave. in Midtown.

La Farge's stained glass was removed. His windows from First Unitarian are currently installed at the Detroit Institute of Arts.

The church changed hands again, becoming the Resurrection Promise Church. It joined the National Register of Historic Places on Aug. 3, 1982, but the building was abandoned sometime in the 1990s.

On May 10, 2014, a two-alarm blaze broke out before 7 a.m. The fire gutted the church, and crews began knocking it down hours after the fire was out.

DetroitUrbex.com reported the morning of the arson that firefighters told him that the church's owner, Salim Kemenko, had wanted to tear down the church but couldn't because of historic protections. The Department of Justice was concerned that the old building was a fire target, as it was on their list of places to watch.

Stay tuned for more on the arson investigation. 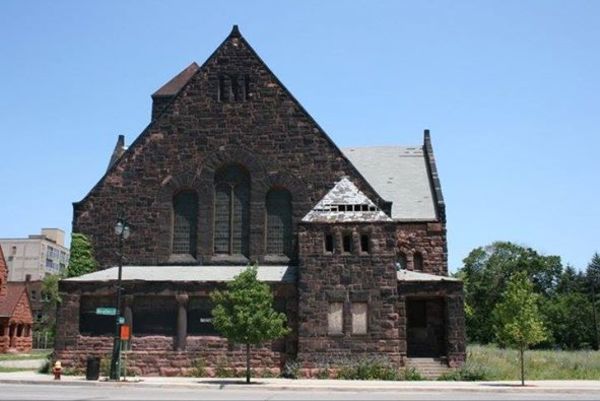