For more than two decades, this church has been the home of the Goodwill Community Chapel. But the building's history stretches back more than 100 years, and it is the only known design by one of the country's most prolific church architects of the late 19th and early 20th centuries.

And its latest religious inhabitants took part in a real-life David and Goliath story.

In 1916, two lots on Charleston Avenue were bought, and a tent was pitched. That Easter Sunday, a congregation of 19 people was organized. That summer, the tent church was enrolled as a mission, and a frame tar-paper tabernacle was built that November thanks to a loan from the Home Mission Board of the Reformed Church in the United States. The board took interest in the group, and sent the Rev. Frederick William Bald to officially organize the congregation. Bald, who was, indeed, bald, officially became pastor on Jan. 15, 1917.

Under Bald’s leadership, a permanent home was planned, and the cornerstone of this church was laid July 6, 1919. The church was designed by Charles W. Bolton & Son, a prolific firm out of Philadelphia. Bolton designed more than 500 churches, but the Trinity Reformed Church is his only known structure in Detroit. The church was dedicated Sept. 26, 1920, and a church house was added in 1928 to provide classrooms for Sunday school after the classes outgrew the space in the church's basement. At the time of the church’s dedication, the congregation had 80 members, with 300 students in Sunday school.

The festivities began at 10 a.m. saw addresses by several visiting ministers and a consecration ceremony at 11 a.m., with Miss Rebe Looks playing the consecration hymn on the organ. T.W. Edwin Solly sang, “How Lovely are Thy Dwellings.”

In 1934, the Reformed Church in the U.S.A. and the Evangelical synod of North America merged, forming the Evangelical and Reformed Church. This merger represented both branches of Continental Protestantism of the 16th century, its doctrine based on Luther's catechism and the Heidelberg catechism, where they agree. Though liturgical, each congregation was given the freedom to determine the character of its own worship services. The merger led to the West Seven Mile congregation's name to be changed to Trinity Evangelical & Reformed Church.

No goodwill toward GM

Meanwhile, the City of Detroit filed condemnation proceedings against Goodwill Community Chapel, 2431 E. Grand Blvd., in November 1980. The church occupied the former Edgar A. Guest Boys Club at 2431 E. Grand Blvd., and the City tore its building down for the infamous Poletown Plant assembly plant project for General Motors. The City said that building the new plant, and the jobs it would keep in the city, outweighed the hundreds of displaced Detroiters that had to make way for it. Goodwill, an organization that dates back to 1960, would move into the West Seven Mile building by December 1983.

However, Goodwill did not have goodwill toward GM. The City originally offered Goodwill just $43,000 for the property. Goodwill sued. After more than 10 years, two trials and three appeals, the grievance was finally resolved with Goodwill getting a payment of $440,000.

Goodwill continues to operate the church on West Seven Mile. 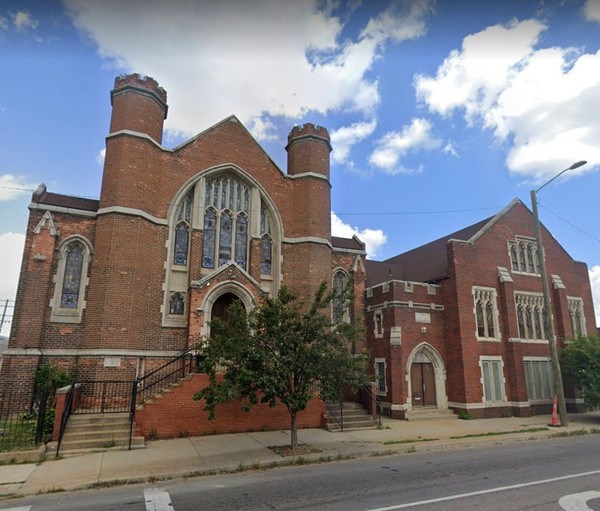