By AMY ELLIOTT BRAGG for HistoricDetroit.org

Lizzie Merrill Palmer was growing weary of the traffic, noise and crowds of the city. She longed for a retreat, a place where she could live as people had in the early days: simply, peacefully and on plenty of land.

It just so happened that her husband, Sen. Thomas W. Palmer, had plenty of land – a few hundred acres of it along Woodward Avenue in what was then considered the country. He had inherited it from his grandfather James Witherell, a Supreme Court judge of the Michigan Territory, and had ''played with it'' since the 1860s, growing his holdings and farming the land. He kept an orchard and raised herds of cattle and Percheron horses.

In 1885, Thomas Palmer gave his wife a present: plans for a rustic log cabin, just like they used to see in the old days, built to her specifications, suitable for summering and entertaining. The Cabin, designed by upstart architecture partners George D. Mason and Zachariah Rice, was completed in 1887. (Rice later married the Palmer's adopted daughter Grace.)

"On the outside, the Log Cabin looks like a substantial, genuine log house," Crocket McElroy wrote in "Souvenir History of Palmer Park." "On the inside it comes pretty near being a good modern house."

The two-story Log Cabin is built from oak logs (with the bark still on!) on a brick foundation. Wooden awnings shade the windows. Two chimneys rise from each end of the house. Inside, red brick fireplaces warm the dining room on the north end and the parlor on the south end. The walls were plastered, the floor laid with white maple and walnut planks, and the grand staircase carved from oak.

The Palmers filled the Cabin with family heirlooms, souvenirs from Palmer's stint as Ambassador to Spain, and relics that evoked Michigan's pioneer days. Above the mantel: a flintlock pistol. Over the front door: elk antlers. Other highlights included James Witherell's mahogany grandfather clock, built in 1787; a century-old Gelt V. Walker piano; leather buckets from the days of Detroit's ''bucket brigade'' fire department; spinning wheels; a Mexican saddle and spurs; a stuffed blue heron; an elk's head; and various swords, snow-shoes and Indian bows and arrows. Family portraits and paintings of presidents hung on the walls. The cabin's furniture had supported generations of Palmers and Witherells; both Lizzie and Thomas's childhood highchairs had a place in the dining room, and Judge Witherell had brought his hand-made dining room chairs from Vermont in 1808. In the parlor they kept a cradle from 1822 that had rocked Thomas Palmer and each of his 8 brothers and sisters to sleep at some point. From the rafters hung bundles of herbs, dried fruit, and corn. (They also stored a birch bark canoe up there – no frontier homestead would be complete without one.)

The Palmers spent summer after summer there and invited friends and diplomats for dinner parties. (In 1911, a writer for a horse-breeding gazette recalled that "there was no formality" at Log Cabin feasts; "Dinner," he wrote, "was announced with an old tin horn.") Whenever a fellow Senator visited, Palmer asked him to plant a tree, from which he hung a brass plaque engraved with his name.

The Log Cabin sits near the bank of Lake Frances, a man-made lake dotted with small islands and anchored by a miniature red-and-white lighthouse that was once lit up with an oil lamp. Palmer once observed that Lake Frances was "a perfect breeding ground for goldfish," and children used to feed them with bread crumbs – and sometimes fish for them.

In 1893, Thomas Palmer gave the city 140 acres of his land, including the Log Cabin, to be used for a public park, if they would agree not to touch its virgin woods – as old as Michigan itself – and to provide police protection.

"Log Cabin Park" – the name Palmer gave it – didn’t stick. It was Thomas Palmer's land, his act of magnanimity, his park. In 1897, the Common Council unanimously approved an ordinance to officially rename it Palmer Park.

The Log Cabin became a sort of museum – to the old days, to old ways of homemaking, and to one of Detroit's founding families.

''The spinning-wheels, fireplaces, old clocks, warming-pans and innumerable other old articles would be no novelty to our grandmothers, but to the younger generation they are of considerable interest as showing the utensils our ancestors had to use in their daily round of household work,'' a reporter wrote in the May 28, 1897, edition of Onward Magazine.

For a while, the Log Cabin was a major tourist attraction, and in the summer visitors from all over the world thronged in for a look. It stayed open until 1979, when the city gave its artifacts to the Detroit Historical Society for safekeeping and closed the Log Cabin to the public.

Today, the People for Palmer Park are trying to restore and reopen the cabin.

On June 24, 2012, the cabin was opened to the public for a quick peek as part of a fund-raiser to restore the landmark. Efforts are ongoing. You can learn more at the People for Palmer Park website.

We take it from him thankfully.

And treasure it so cheerfully,

'Twill be the gem of our fair town –

A park to add to its renown,

And keep forever bright our crown –

From Witherell woods to Merrill vale,

From lake to meadow, field and dale

Amy Elliott Bragg writes the blog Night Train to Detroit and is the author of "Hidden History of Detroit". 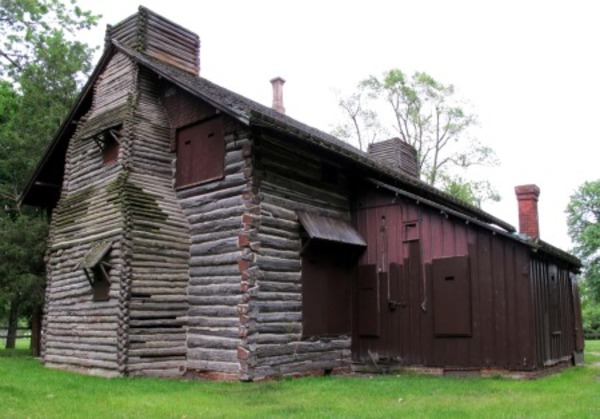