By William M. Worden and Dan Austin of HistoricDetroit.org

On May 4, 1993, a four-alarm fire tore through yet another abandoned church in Detroit, destroying it.

To Joseph Foster, a businessman who owned buildings near the church in the city’s Brush Park neighborhood, it was “a blessing,” he told the Detroit Free Press as a city wrecking crew tore down the structure.

But this wasn’t just any church. To generations of Catholics in metro Detroit, this was the cathedral for the diocese - the mothership for the region’s Catholics.

The twin-spired, red-bricked church featured Gothic archways and a high sanctuary ceiling with rose-colored windows. It was designed by Albert H. Jordan and James Anderson of the Detroit architectural firm Octavius and Albert Jordan. It stood on Adelaide Street, between Woodward Avenue and John R Street. The first part of the church, a chapel that was later expanded, was dedicated by Bishop Peter Paul Lefevere on March 17, 1862 - the feast of St. Patrick.

In 1877, the Bishop Borgess turned Sts. Peter & Paul Cathedral on East Jefferson over to the Jesuits to induce them to establish what is now the University of Detroit-Mercy and that cathedral became a parish church. St. Aloysius became the pro-cathedral until 1890 when St. Patrick was given the cathedral function and renamed Sts. Peter & Paul Cathedral. The cathedral designation was a big deal, effectively making the modest church “the capitol” of the diocese, however, St. Patrick would prove to be rather inadequate as a mother church.

During the boom years of the 1920s, Bishop Gallagher proposed a huge new Neo-Gothic cathedral and bought land for the new church, but the Great Depression put an end to that project. So St. Patrick’s remained the cathedral until 1938, when Archbishop Edward Mooney arrived as the first head of the newly-established Archdiocese of Detroit and found his cathedral to be a modest and somewhat ramshackle brick church in a run-down neighborhood. Legend has it that Mooney had himself driven around the city looking at prominent parish churches until he encountered a large Neo-Gothic church on Detroit’s main street and located in an upscale area.

As Detroit’s fortunes fell - especially in the church’s Brush Park neighborhood - St. Pat’s attendance fell with it. In 1972 the original church on Adelaide was closed and all services transferred to the parish’s chapel of St. Therese of the Little Flower on Parsons Street adjacent to the parish school building. The chapel assumed the name of St. Patrick’s Church.

In 1973, the Archdiocese gave the old church to the Woodward East Project, a neighborhood development group. Plans included turning the interior into a gym and the chancel into a theater.

Those plans never materialized, and the church ended up in the hands of the city, which let it sit and rot. It was abandoned and being used by only the homeless and drug addicts and became an eyesore. Thieves made off with the stained glass and organ pipes. Vandals destroyed the church’s plaster angels. The building had been repeatedly boarded up, but even the plywood was stolen.

Twenty years after the church gave up on its old cathedral, someone torched it. That blaze on May 4, 1993, proved to be fatal and the city went to work destroying what the fire hadn’t that same day. The rectory next door on John R. was demolished about the same time.

Someone who attended the church as a child, told the Free Press: “I’m about to cry,” Joann Wilburd said as she looked at the wreckage. “It’s a sickness in this neighborhood. Each year we lose more and more. There goes this whole block. The church gave it the feeling that this block would be saved.”

Today the site of the church is part of the Crosswinds Communities condo complex known as Woodward Place at Brush Park. The homes went up about 2000 as part of a redevelopment program that attempted to revive the old neighborhood.

St. Patrick’s Parish closed in 2015, but the archdiocese retained ownership of the chapel/church on Parsons Street in hopes that the revitalization of Midtown might make it possible to reopen it someday. 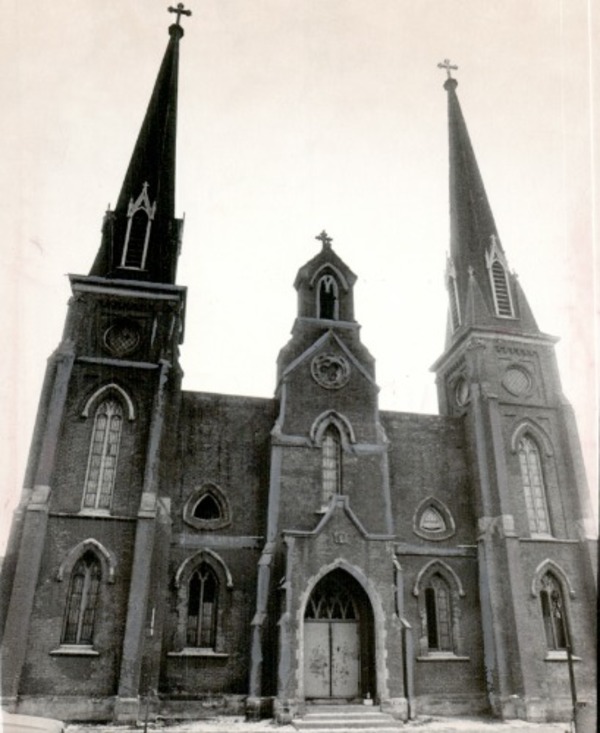