The University of Detroit Mercy was founded by Jesuits in 1877 downtown as Detroit College. Today, the institution is the state’s oldest and largest Catholic university, and the Memorial Tower is its most distinct and beautiful landmark.

And this landmark came about as a way to disguise the chimney for the school's power plant.

By the fall of 1924, the school’s student body had increased by 300 percent in just three years. As its downtown campus grew too cramped, the college bought land at West McNichols Road and Livernois Avenue in 1927 — the same year that it became the University of Detroit. The firm Malcomson & Higginbotham won a design competition for the U of D campus, choosing a Spanish Mission style for the university’s buildings. The school’s power plant, faculty building, chemistry, science, engineering, and commerce and finance buildings opened with the university for the 1927 school year.

But that power plant also had a big ol' unsightly chimney smack dab in the middle of campus.

So it was decided to sheath the chimney behind a beautiful 175-foot clock tower, also designed by Malcomson & Higginbotham. The tower was dedicated to the school's 12 students and alumni who gave their lives during World War I; it was said that they gave their lives for the ideals that the university sought to instill in its students.

The grounds and buildings were blessed Oct. 9, 1927, by Bishop Michael J. Gallagher.

In 1990, the school merged with the Mercy College of Detroit — founded in 1941 by the Sisters of Mercy — and became the University of Detroit Mercy.

The clock tower continues to be not only a landmark for the university but for all of northwest Detroit. 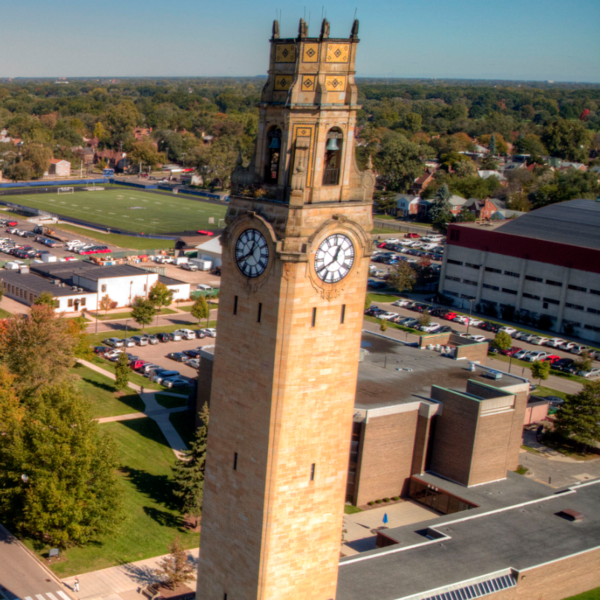