Van Dyke Manor was built in the West Village neighborhood, near the many prestigious mansions of Indian Village.

It was designed by architect Jacob I. Weinberg and opened Nov. 4, 1928.

"Here is the long-sought ideal of the discriminating person who cannot be satisfied with mere material comfort, but must have atmosphere, taste and smart distinction in his or her surroundings," an ad in The Detroit News announcing the opening of the building said. "Van Dyke Manor was planned with the ideal of serving the needs, comforts and taste of the most particular. ... (Van Dyke Manor was) an apartment home that adds more to the enviable prestige of Indian Village."

The building originally had three- and four-room apartments, with rates of about $100 a month, the equivalent of about $1,700 a month in 2022 inflation-adjusted dollars. In addition to rooms that were "commodious, airy and well-planned," the ad said, rooms featured fireplaces, cork floors, concealed radiators, reception rooms, automatic thermostats, baths and showers, extra large Kelvinator refrigerators, mirrored doors in all bedrooms and more.

The newspapers at the time reported on lavish parties thrown by the Van Dyke Manor's well-heeled residents.

The building has been renovated and the large apartments divvied up into smaller units. However, the 38 units still feature the original, elaborate plaster details, coffered ceilings and wood paneling, and the building still sports an Art Deco-styled elevator.

Around 2:30 a.m. on Feb. 14, 1976, a fire broke out in the Van Dyke Manor. Burnis Wade, 31, and Sandy Hebert, 23, were making a grocery run when they saw flames shooting out of a window of one of the building's fifth-floor apartments. They called the Detroit Fire Department from a nearby gas station and returned to the building, where they buzzed each apartment until someone let them in. They then ran up the stairs trying to find the apartment that was burning. When he did, they kicked in the door but were driven back by smoke. They retreated but banged on nearly every apartment door to wake sleeping tenants and get them out of the building. The resident of the burning apartment survived, and all damage was confined to the one unit. One thankful resident called Mayor Coleman Young's office to tell Hizzoner about the pair's heroics. They received Awards of Merit from Young, as well as a citation from the fire department. Residents of the building threw a thank-you party for them, as well.

In the mid-1970s, Van Dyke Manor was bought by Michael Higgins, "the 29-year-old boy wonder of Detroit real estate," as the Detroit Free Press called him in a Jan. 15, 1978 story. But some of his tenants complained that he had jacked up rent and wasn't maintaining his buildings. "The tenants of Van Dyke Manor have been battling with Higgins off and on for more than two years," the story continued. "A leaking roof that damaged one occupant's master's degree thesis and ruined a dinner party table setting for another caused problems for 18 months, they say." Higgins replied that "I think the building is beautiful. If they don't think it's worth the rent, they shouldn't be living there." In July 1976, the City's Building Department issued 57 violations for Van Dyke Manor.

“The building is in very good shape; however, we do plan to upgrade units as they become available to new tenants,” a representative for the buyers told Crain’s. “We are also discussing specific upgrades to the apartments and roof, but are not willing to comment further until those plans are finalized.”

Almost 100 years after it opened, a one-bedroom apartment rents for about $1,000 a month. 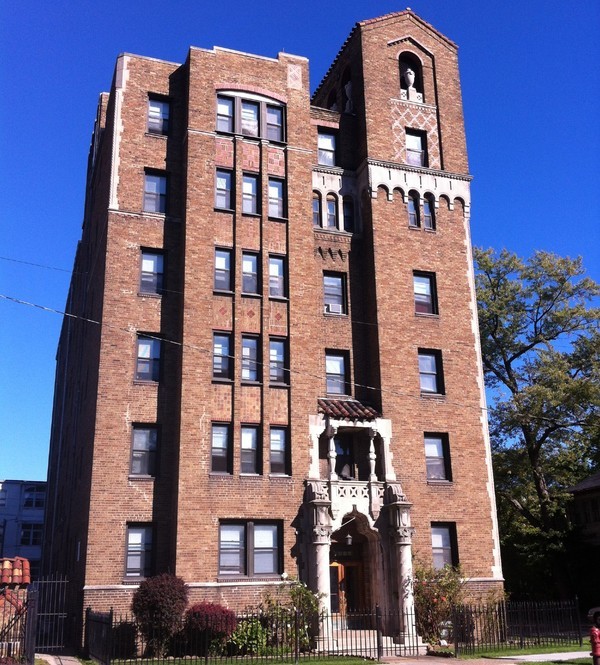