By Denise McGeen for HistoricDetroit.org

An unassuming man with a romantic imagination and a talent for attracting as much controversy as celebration, Seattle-born architect Minoru Yamasaki left behind an impressive collection of unapologetically unique modern buildings. Best known for his design of the ill-fated World Trade Center in New York, Yamasaki made a name for himself with whimsical designs that incorporated history, humanism and inspiration into modern, technologically advanced buildings. Yamasaki’s Detroit-based firm is credited with dozens of designs throughout the United States, including in Detroit and numerous other cities, as well as in Canada, Japan, Saudi Arabia and India. The American Institute of Architects awarded him three AIA First Honor Awards, and in 1963, named him an AIA Fellow.

Yamasaki was born to Japanese immigrants on Dec. 1, 1912, in Seattle’s working class Yesler Hill neighborhood. At age 16, Yamasaki enrolled in the University of Washington’s architecture program. To pay tuition, he spent the next five summers working in Alaskan canneries. Although he described the conditions as horrifying and the work unbearable, the serenity of the Alaskan environment so impacted Yamasaki that for the rest of his career he sought to recapture the awe of open space and the lightness of the white landscape in the buildings he designed.

After college, Yamasaki enrolled in a master’s program at New York University. He supported himself wrapping dishware at an importing company before finding work as a draftsman at the firms Shreve, Lamb and Harmon, and later Harrison, Fouilhoux and Abramovitz. In 1941, he married Teruko Hirashiko. The couple later had three children: Carol, Kim and Taro, who would go on to become a Pulitzer Prize-winning photographer at the Detroit Free Press.

During World War II, when thousands of Japanese-Americans faced internment by the U.S. government, Yamasaki’s parents joined the family in their two-room New York City apartment. Although many architects were out of work during the war, Yamasaki weathered the industry-wide slowdown as a draftsman.

In 1945, the Detroit firm, Smith, Hinchman & Grylls (today known as the Smith Group) recruited Yamasaki to be their head designer. After moving to the city, Yamasaki discovered that as a Japanese-American, restrictive covenants prevented him from renting or buying property in many desirable metro Detroit communities. The family settled on a 7.5-acre farmstead in Troy, where they remained for 25 years. Author Thomas J. Holleman, in his corporate history of SHG, lists among Yamasaki’s achievements at the firm the addition to Detroit’s Federal Reserve Bank (1946), the administration building at the General Motors Proving Ground (1950) and several Michigan Bell telephone exchanges.

Yamasaki stayed with SHG until 1949, when he and two colleagues, George Hellmuth and Joseph Leinweber, formed their own partnership. Their work included the now infamous Pruitt-Igoe public housing project in St. Louis (1955, Demolished 1972-1976) and the Lambert-St. Louis Airport Terminal (1956). Unfortunately, the years of constant travel between St. Louis and Detroit took its toll on Yamasaki. In 1954, a near-fatal bout with stomach cancer led him to end the partnership. He returned to Michigan to convalesce and the next year founded Yamasaki & Associates (with Leinweber). The firm’s office was located in Troy.

Yamasaki’s early training and experience were influenced by the austerity and practicality of the Modern and International Style movements. However, in 1955, his perspective on the state of architecture and his personal aesthetic ambitions substantially changed. That year, he was commissioned to design the U.S. Consulate in Kobe, Japan. While there, he took the opportunity to embark on an architectural heritage tour of Japan, Italy, and India. Having never traveled outside the U.S., the trip proved to be eye-opening and career changing. As he described in his 1979 autobiography, the Japanese temples hidden amongst the crowded city streets made a particular impact. He was most taken, he said, by the element of surprise he experienced when emerging from the city’s commotion into the temple’s peaceful gardens and pools. In Italy, he studied Renaissance architecture in Venice and Rome, admiring their public squares and soaring Gothic cathedrals, whose texture and ornamentation are unmatched anywhere. Finally, he visited India and was awed by the sense of aspiration that the Taj Mahal’s silhouette against the skyline elicited in him.

From these travels, Yamasaki developed an architectural philosophy that shaped the rest of his career. He openly eschewed the monotonous “glass boxes” that his contemporaries designed. Instead, Yamasaki sought to humanize architecture by combining historic decorative elements with new technology. In a 1962 speech in Seattle, he articulated his disillusionment with modern architecture, declaring it to be in a state of anarchy.

He went on to say: "Man needs a serene architectural background to save his sanity in today’s world. … The state of architecture, like the state of the world, is uneasy and chaotic. … I believe that architecture must be dignified and elegant. It must be humanely scaled to man so that he has pride in it, so that he loves it, so that he wishes to touch it. It must have ever-changing qualities to overcome the boredom caused by the repetitious quality of machine production -- changing space, light and mood -- a soaring quality which represents the realized and potential nobility of man in our society. There must be elements of delight, to offset the monotony of mass-produced building and to enhance the enjoyment of life. Yet we must thoroughly respect technology, since only by constructing our buildings through the machine process can we economically produce the vast amount of building necessary to house the varying activities of man."

Every design he created from then on strove to elicit three responses: surprise, serenity and delight. His new historic influences, combined with his desire to recreate the open Alaskan environment, his time spent in the cluttered streetscape of New York City, and his early training in the modern architectural movements, evolved into a philosophy that clearly manifests itself in each of his designs.

Architecture critic Ada Louise Huxtable perhaps best described it in a 1962 New York Times article: “The work is so characteristic of its designer that it could be picked out as Yamasaki’s in any simple guessing game,” she wrote. “There are pools and plants, skylights and courts, domes, vaults, arches, arcades, canopies and colonnades. Materials are sumptuous; surfaces are intricate. These are exotic, elaborate designs intended to delight the senses.”

He did all of this using innovative structural engineering methods and modern materials, such as pre-cast concrete. Although frequently criticized for being over-decorated like “wedding cakes” or “jewelry boxes,” his designs were also often praised for being interesting, if not beautiful to experience. At the very least, his work never lacked controversy and was always distinctly Yamasaki.

In 1974, Yamasaki designed a 7,000-square-foot home for his family in Bloomfield Hills, complete with a reflecting pool and landscaped garden.

Yamasaki’s career ended with his death from stomach cancer on Feb. 7, 1986, at age 73. Yamasaki & Associates carried on until Dec. 31, 2010, when unpaid debts forced it to shutter its doors. The firm walked away from the office, leaving everything, including the corporate records inside. In the months that followed, the Oakland County government ordered the firm’s records be shredded, citing security concerns over plans for sensitive buildings (such as banks). Facing the destruction of the firm’s valuable records, the Michigan State Historic Preservation Office, the Michigan State Archives and the Michigan History Foundation assembled an emergency team to rescue the files. At the final hour, the team successfully saved original drawings, photographs, models and boxes full of other corporate records. The records are now safely housed at the state archives. 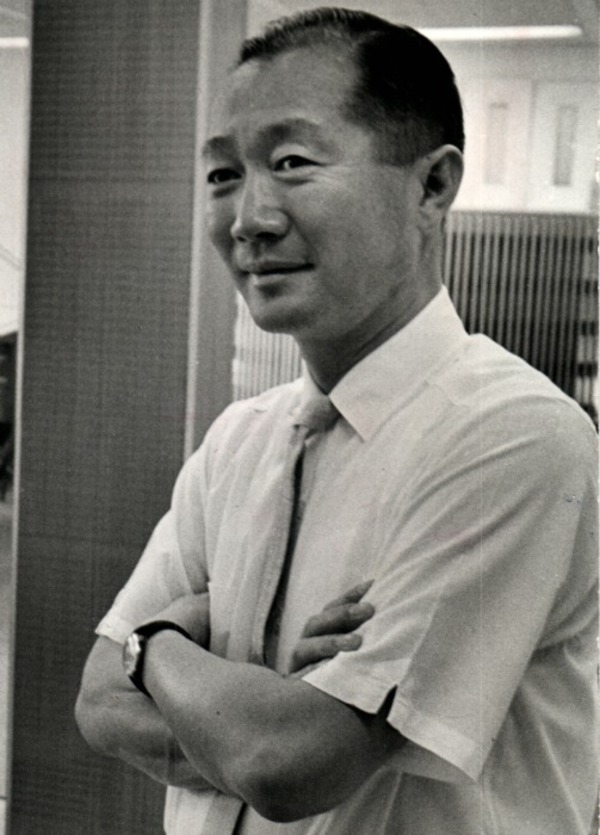