By Blake McDonald for HistoricDetroit.org

On December 20, 1959, Wayne State University’s Board of Governors gathered at a muddy construction site to watch a concrete column lowered slowly into the ground. The single support represented the cornerstone of what was then the country’s largest school of education, as well as one of Detroit’s most dramatic modern buildings. The College of Education Building, the second of four facilities at Wayne State University designed by world-renowned architect Minoru Yamasaki, gave “another touch of splendor to the urban campus,” The Detroit News wrote that day.

The College of Education Building occupies the northwestern quadrant of the Wayne State University campus on a lot bounded by West Kirby Street to the south and West Ferry Avenue to the north. At the time of its construction, the building faced onto Second Avenue, which was later closed to create the pedestrian corridor known as Gullen Mall.

Four stories high with a full basement and measuring approximately 171 feet by 131 feet, the College of Education sits atop a 2-foot high, stepped, rectangular pedestal. A series of interlocking concrete panels make up the building’s structural core, which is wrapped in an exterior screen of sharply pointed triangular arch window openings divided by precast concrete columns. On the upper floors, the columns project several feet above the roofline and, together with the arched windows, draw the eye upward to disguise the building’s considerable mass. The ground floor of the College of Education is deeply recessed, further masking the bulk of the facility and allowing for a continuous arcade around the building. On the overhanging upper floors, the full-height windows are deeply inset, four-light, aluminum sash. In each, the lower two panes contain unpolished gray plate glass, which, according to a building description from 1960, “screen the view from the exterior of desks, chairs, and other miscellaneous items.” Above each window, two angled concrete panels meet at the peak of the window’s arch, accentuating the building’s verticality. The fourth floor consists of a setback penthouse, barely visible from the campus below and featuring four small roof decks. As on the floors below, concrete columns divide each elevation into a series of identical panels consisting of inset triangular arches. Two, triangular-arched, single-pane aluminum sashes occupy each of the penthouse’s inset arches.

Upon entering the College of Education Building, the striking exterior form gives way to a practical and highly efficient arrangement of spaces. Beyond each of the building’s two entrances, a modest vestibule leads to an open staircase. The facility’s elevators, mechanical systems, and bathrooms are clustered at the center of each floor. In the basement and on ground floor, a hallway surrounding this core allows access to classrooms and laboratories. On the two floors above, classrooms are located adjacent to the core and bound by a corridor lined by offices along the building’s outer walls. The fourth floor, which was designed to house the School of Education’s administrative offices, contains office suites at its corners surrounding a central, open lounge.

Unlike the nearby and richly ornamented McGregor Memorial Center, Yamasaki finished the College of Education Building’s interior in basic and economical materials including wood veneer, asphalt tile, and plaster. Yet while its many classrooms and offices may not have appeared particularly luxurious, the building contained some of the most advanced technology available when it opened in 1960. Alongside state-of-the-art fire detection and air conditioning systems, the College of Education boasted a two-way public address system, intercoms, and closed-circuit television/radio capabilities in each teaching space. Many of the classrooms also featured adjacent psychological testing rooms with one-way windows for client observation. Soon after its completion, an interdepartmental memo described the College of Education as containing “the most complete and modern system of electronic educational aids, signal and communication systems installed in a building of this type,” a Wayne State description from the time said of the $2 million building.

The building was dedicated on April 20, 1961. President Clarence B. Hilberry told an audience of 150 at the ceremony that "the beauty of our new Education Building reflects the quality of work which will go on in it."

Francis C. Rosecrance, the College of Education's dean at the time, praised Yamasaki in his remarks for "combining beauty and function."

"As we dedicate this new building," Rosecrance continued, "we also dedicate ourselves to the task of furthering the goals of true liberty and freedom."

‘An island of order and scholarly calm’

By the time the College of Education Building opened its doors, Wayne State University had been graduating teachers for more than 80 years. First known as the Detroit Normal Training School for Teachers, the school graduated its first class of 15 women in 1881. The institution grew quickly, and was forced to relocate six times in its first 50 years. By 1930, the school operated out of Wayne State’s Old Main, originally Detroit’s Central High School. This remained the institution’s official home until 1961, though the school was spread between 16 buildings by the time that ground was broken on the College of Education Building.

Beyond providing a centralized home for the previously scattered department, the construction of the College of Education Building also fit within a far larger initiative to restructure the Wayne State University campus. After World War II, enrollment in the institution reached record highs, leading the Board of Governors to propose a several-decade expansion of the university. Central to this program was the creation of a new campus plan to determine the location of future facilities, a process began in 1942 under the leadership of local architect Suren Pilafian. By the mid 1950s, Yamasaki had taken charge of the project and significantly modified Pilafian’s original layout to include a wide pedestrian mall lined by unique, modern buildings. Over the following decade, much of Yamasaki’s scheme became reality. The College of Education, which faces onto the pedestrian mall and once anchored the northern end of the new campus, was one of four structures that Yamasaki added to the university to accomplish his plan.

For Yamasaki, the Wayne State University campus plan commission occurred during a professional period of innovation and originality. Only a few years before, the architect had taken a several-month tour through Asia and Europe that he would later cite as a turning point in his design philosophy. Yamasaki described how the timeless allure of spaces ranging from Japanese gardens to French cathedrals inspired him to create buildings that expressed the innate human desire for “delight, serenity and surprise,” New York Magazine wrote Aug. 27, 2011.

The College of Education Building, along with the slightly earlier McGregor Memorial Conference Center, represented two of Yamasaki’s first attempts to achieve this end. These buildings utilized elements of high modernism, the aesthetic that defined the architect’s earlier works, but incorporated unusual, naturalistic forms and abstracted historical references to produce something far removed from the minimalism and standardization that characterized most modernist design. The College of Education stands as a particularly articulate example of this approach, as its triangular arches and stylized turrets have been described as both an allusion to Venetian Gothicism, or a forest of narrow, concrete trees. Others have described the College of Education Building as a wedding cake, and Yamasaki himself is said to have jokingly placed bride and groom statuettes on a model of the building presented to Wayne State University’s Board of Governors.

Nevertheless, the Wayne State University Alumni Magazine called the College of Education Building “an island of order and scholarly calm.”

In addition to imbuing the College of Education Building with a playful and evocative aesthetic, Yamasaki used the commission to advance his understanding of light and shadow as essential design components. The architect believed that well-planned spaces ought to continuously offer new experiences to their users. To achieve this end, he capitalized on the movement of the sun. The arcade surrounding the College of Education, for example, functioned as a canvas for the constantly changing silhouettes of the triangular arched exterior screen. On the second and third floor, the facets of the precast concrete panels and the reflective aluminum window frames provided further surfaces to catch the sun. The contrast of brightness and shadow was most apparent in the layout of the penthouse, where light captured by the four separate roof decks would chart the sun’s path throughout the day.

The College of Education Building opened in the fall of 1960 to wide acclaim from both local news sources and the national community of contemporary architects. Though the building’s form found broad approval, many of its early occupants balked at the very elements that set the College of Education apart from its more traditional predecessors. Most problematic was the arrangement of the faculty offices along the building’s outer walls. Yamasaki intended for these rooms to serve as “a bright oasis,” “The WSU Minoru Yamasaki Legacy wrote in 2013, offering panoramic views of the bustling campus below. Instead, professors complained that the tall windows produced harshly bright and unpleasantly warm workspaces. Many installed curtains or even taped paper to the glass to block the glare. Today, the offices are shielded by vertical slat blinds, which provided both a uniform appearance and echo the ascendant qualities of the exterior design.

Aside from a small number of equipment updates and finish replacements, the College of Education Building remains largely intact.

As interest in Yamasaki’s career and Detroit’s modern architectural heritage swells, the College of Education Building has received attention from several historic preservation advocacy groups, including Michigan Modern and Wayne State’s Yamasaki Legacy Project. However, despite being nominated, the College of Education had not yet been listed on the National Register of Historic Places.

The building continues to serve as the home of Wayne State’s Education program. 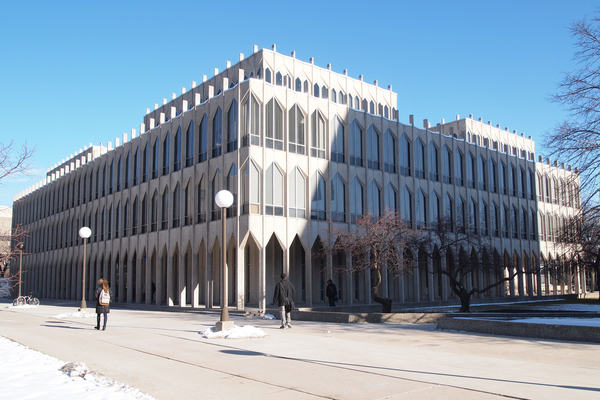