There are few things more beloved by Detroiters than "the Boblo boats," a pair of steamships that carted generations of families off to the Boblo Island theme park.

The pair are the two oldest propeller-driven steam excursion ships still in existence in the U.S. As the "big sister" to the SS Ste. Claire, that makes the SS Columbia the oldest passenger steamer.

For nearly a century, the Columbia puffed up and down the Detroit River. The Columbia was built in 1902 for the Detroit, Belle Isle & Windsor Ferry Co. by the Detroit Ship Building Co. in Wyandotte, Mich.

The Columbia was launched May 10, 1902, to run day trips between Detroit and what was then Bob-Lo Island. The Ste. Claire followed eight years later. They were both designed by Frank E. Kirby; Louis Keil handled the interior decoration, outfitting the boat with mahogany paneling, leaded glass, gilded moldings and more, though much of that beauty was painted over in its later years. As steamships gained in popularity, new features were introduced during this era. It is believed that the Columbia is the first steamer in the U.S. with a ballroom.

The Columbia is 207 feet long and features a 27,000-square-foot wooden superstructure on a riveted steel hull. It has three decks and was built to lug 3,200 passengers at a time. She is powered by a 1,200-horsepower, triple-expansion reciprocating steam engine.

The Boblo boats were listed on the National Register of Historic Places on Nov. 2, 1979.

When the amusement park saw a drop in attendance, the Columbia and Ste. Claire were taken out of service. Their last trip was Sept. 2, 1991. The park closed two years later. In the meantime, however, the Columbia was designated as a National Historic Landmark on July 6, 1992. An impressive feat for a boat.

The Boblo boats had been tied up at a dock at U.S. Steel in Ecorse, Mich., for years.

The Columbia was "shrink-wrapped" around 2004 in an effort to preserve the vessel, but the plastic created a greenhouse type effect that sped up the rotting of the 100-year-old wooden superstructure. This has left the boat's future in jeopardy -- and added dramatically to the cost of the efforts to get her sailing again. The vessel's boilers and much of its wooden superstructure that has rotted would be replaced under the plan.

The Columbia changed hands a few times before being transferred in 2006 to the S.S. Columbia Project, a 501c3 nonprofit seeking to make her a sightseeing attraction to ply the Hudson River in New York state. Estimates to get her shipshape and running again range from $10 million to $20 million.

"The boat is looking like it’s going to have a happy ending,” said Liz McEnaney, executive director of the Columbia Project. “We know we have a lot of ground to make up in terms of past promises for the Detroit fans.”

On Sept. 16, 2014, the Columbia Project relocated the boat from Ecorse to Toledo, Ohio, where it was to receive some restoration work ahead of its planned eventual move to New York. Estimated renovation costs are between $10 million and $20 million.

For more info on the Columbia Project, go to www.sscolumbia.org.

More on this landmark coming soon. 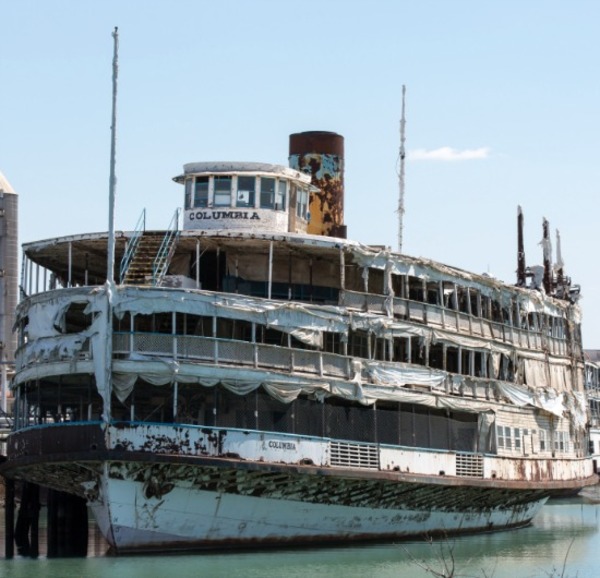