She is one of the storied Boblo boats that whisked generations of Detroiters to Boblo Island.

The SS Ste. Claire spent her life whisking Detroiters away to Boblo Island, originally Bois Blanc Island, 18 miles southwest of Windsor, Ontario. The park was in Canadian waters and opened in 1898 by the Detroit, Windsor, and Belle Isle Ferry Co. The 3-mile-long Bois Blanc was the name bestowed on the island by the French, and is said to have come from the white birch and beech trees that once covered it. Many Detroiters, unable to pronounce the French name, called the island Bob-Lo, and the name became the official name in 1949.

The ferry company commissioned the SS Columbia expressly for runs to the island, and it was put into service in 1902. Eight years later, it was joined by the Ste. Claire. Both vessels were designed by Frank E. Kirby. The Ste. Claire, a propeller-driven excursion steamer, was launched May 7, 1910, by the Toledo Shipbuilding Co. at Toledo, Ohio.

AAA Michigan bought the steamers and the island in 1983 and would run the amusement park until 1988, when it was sold to the IBC International Broadcasting Co.

The Ste. Claire and the Columbia, made their final run to Boblo Island on Sept. 2, 1991 -- ending 74 years of continuous combined service -- and smaller boats were used to transport families to the island.

Smaller, cheaper-to-run boats made runs to the amusement park, which thrilled families until Sept. 30, 1993, when it, too, closed. The park was mostly disassembled and sold off piecemeal. Some of it still remains however, though most of the island has been turned into a private residential community.

The Ste. Claire was sold and turned into a floated haunted house.

In 2007, the Ste. Claire was purchased by Dr. Ron Kattoo and his Maximus Corp., which has vowed to renovate the beloved vessel. Its pilot house was removed, and parts of the stern were disassembled as Kattoo set out to renovate her.

It was unclear whether the vessels would be allowed to sail again, because they don't meet U.S. Coast Guard regulations. They had been grandfathered in, but once they stopped sailing, they lost their exemption.

The Ste. Claire returned to Detroit, on Jan. 9, 2017, when she was towed to the Riverside Marina, near Belle Isle. Kattoo continued to try to undo decades of decay.

But sadly, on July 6, 2018, the Ste. Claire was completely destroyed by a fire that broke out on board. The flames took with them not only her wooden superstructure but the memories of generations of Detroiters. 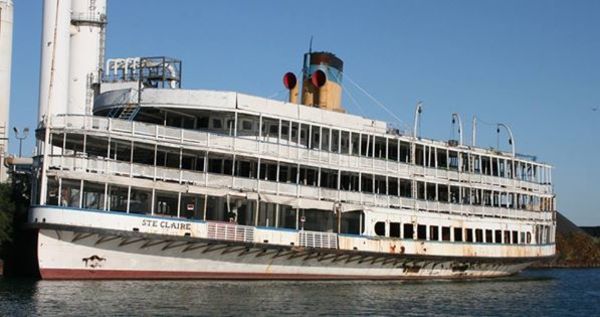