The SS Western States was one of the Detroit & Cleveland Navigation Co.'s Big Six of overnight passenger steamers.

She, like the other five, was designed by master naval architect Frank E. Kirby and built at Detroit Ship Building Co. in Wyandotte, Mich. Though she and her sister ship, the Eastern States, were originally built for the Detroit and Buffalo Steamboat Co., which was absorbed into the D&C line in 1909.

The Western States was launched on Jan. 18, 1902, and featured a 4,200-horsepower, three-cylinder inclined compound steam engine that was fired by six coal-fired Scotch boilers. The paddlewheeler was 350 feet long.

As D&C added bigger boats to its fleet, the Eastern and Western were moved off the main routes and relegated to trips to the upper lakes, and stops such as Mackinac Island.

With the introduction of the freeway system, overnight steamship travel become passe, and D&C was forced to lay up its fleet in 1950. In June 1955, the Western was towed by the tugboat John Roen III to Tawas City, Mich., to be converted into a "flotel." She was unofficially renamed the SS Overnighter. But this venture proved to be a bust, and she was sold to Siegel Iron & Metal Co. of Detroit in December 1958 to be cut up for scrap.

During dismantling, the Western caught on fire at dock in Tawas City on March 21, 1959, and was later towed to the Davidson shipyard slip in Bay City, Mich., to be cut up in July-August, 1959. 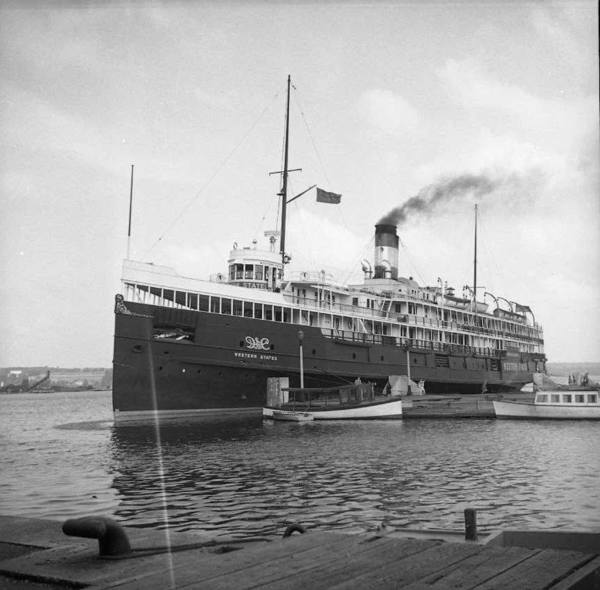