The City of Cleveland III was one of the finest passenger liners to ever sail the Great Lakes -- as well as one of the more unfortunate.

She was part of the storied Detroit & Cleveland Navigation Co. fleet, and was launched Jan. 5, 1907, at Detroit Ship Building Co. in Wyandotte, Mich. Though a fire on May 17 during construction at the shipyard delayed her debut, which had been slated for June 30. The vessel's elaborate interior woodwork and fittings were nearly finished. Despite two fireboats and onshore firefighting equipment, the only things that could be salvaged were her hull and machinery. Damage was calculated at about $700,000.

"The fire broke out just before daylight in some mysterious manner. There are rumors afloat that an incendiary is suspected," the Mansfield (Ohio) News reported the day of the fire. "The officials of the ship yard are at a loss to explain the fire, as there were two watchmen on the ship and another at the gate of the ship yard."

She was rebuilt and finally made her trial trip on April 27, 1908, and her maiden voyage on June 4, when she left Detroit for Sault Ste. Marie, Mich.

At the time of her launch, the 402-foot steamer was the largest in the D&C fleet, ushering in a new era of prosperity and elegance for the company. She was designed to carry 4,500 passengers, with sleeping accommodations for 1,500.

She was built for the Detroit and Cleveland overnight run. As her name would suggest, she was the third vessel in the D&C fleet to carry the name City of Cleveland, though the "III" was not added to her name until 1912, when the City of Detroit III joined the fleet. The heyday of the D&C armada saw six majestic steamers: the Eastern States, Western States, Greater Detroit, Greater Buffalo and the C-III and D-III.

The C-III was a paddle-wheel steamer, with a large steam engine churning the wheels and propelling her through the water. The paddle-wheel boxes had an extreme breadth of 91 feet.

In addition to passengers, she also carried package freight for most of her career.

At 6:16 a.m. on June 26, 1950, the C-III was damaged in a collision with the Norwegian freighter Ravnefjell in fog off Harbor Beach, Mich., in Lake Huron. The C-III was carrying 89 passengers on a cruise for the Benton Harbor Chamber of Commerce, headed for Detroit to watch the Tigers take on the New York Yankees that afternoon. Four people were killed when the freighter crashed into the C-III's port side cabins, near the stern. Her hull remained in tact, however, and she was able to continue on to Detroit. Among the dead: Benton Harbor Police Chief Alvin Boyd and former Benton Harbor Mayor Merwyn Stouck.

Capt. Rudolph Kiessling was found to have not only been "speeding" at 16 miles per hour through foggy conditions, but also traveling too close to shore when heading south -- the C-III was about 4 miles from shore when rules required it to be 10.

By that time, D&C's business had all but evaporated thanks to the advent of the interstate system and the rise of airline travel. As a result, rather than repair her, she was laid up and never sailed again. She sat partially mangled at a dock in Detroit, and then was moved across the Detroit River to Windsor, Ontario. Three years later, in June 1953, the C-III floated off after coming loose from her moorings during a storm and ran aground at Hennepin Point.

In 1954, she was sold to Ventimiglia Demolition Co. of Detroit to be partially dismantled and converted into a crane barge for use in building the St. Lawrence Seaway. However, on Oct. 20 of that year, she caught fire again and partially sank. She was finally scrapped in 1956 in Buffalo, N.Y. -- a fate that also met her four remaining sister ships of the D&C fleet that same year. 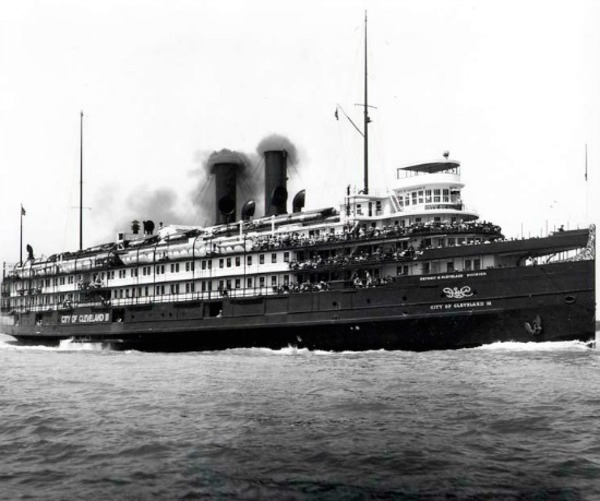