The Greater Buffalo and its sister ship, the Greater Detroit, were the two largest Great Lakes side-wheeled passenger steamers ever built.

They were so big, the Greater Buffalo was turned into an aircraft carrier during World War II. It was an unlikely end to one of the grandest vessels to ever ply the lakes.

If you wanted to get around the country in the early 1900s, you didn’t board a jetliner, you’d either catch a lift on a train or hop aboard a steamship. And of all the steamship lines plying the waters across the country, the biggest in the Midwest was the Detroit & Cleveland Navigation Co. And of D&C’s Big Six steamers, the biggest and grandest were the two Greaters.

Passengers would board in the evening, maybe eat dinner and then sleep the night away. The next morning, they’d be at their destination. D&C passengers took overnight trips from spring through fall, enjoying dinner and drinks as the ship steamed onward east to Cleveland or Buffalo, New York, or north to the Straits of Mackinac.

The D&C line was born in 1850 as the Detroit & Cleveland Steamboat Line, when Capt. Arthur Edwards began operating two small paddle vessels — the Southerner and the Baltimore — with overnight service between Detroit and Cleveland. The line was incorporated in 1868 as the Detroit & Cleveland Steam Navigation Co., but about 10 years later, it was taken over by James McMillan, one of the most influential figures during Detroit’s rise to wealth and prominence. McMillan was the line’s principal figure and would later become a Republican U.S. senator and co-found the Union Trust Co., which built the city’s landmark Guardian Building. He also was president of the Detroit Dry Dock Co., which, conveniently enough, built steamships. With McMillan’s family at the helm, the D&C line would flourish and become the stuff of Detroit legend. The fleet had “the largest boats, the heaviest traffic, and, save for the Old Bay Line, the longest survival of any of the major lines,” George W. Hilton wrote in “The Night Boat,” a book chronicling overnight steamers of the United States.

As World War I drew to a close, D&C already had four successful vessels — the Western States, the Eastern States, the City of Cleveland III and the City of Detroit III — and was looking to boost its business between Buffalo, N.Y., Cleveland, Detroit and Mackinac, Mich. Adding to its armada would allow for D&C to not only increase the number of its customers, but shuffle which boats ran where and when. The boats also carried freight, so the bigger the boat, the more revenue there was to be had there.

In 1922, Frank E. Kirby came up with the design for a massive side-wheeler passenger steamship. D&C would order up a pair of them.

Kirby was the greatest naval architect of the Great Lakes. He was already D&C’s architect of choice, seeing his first effort for the firm launched in 1878, when the first City of Detroit was launched. Kirby is best remembered by metro Detroiters for designing the beloved Boblo boats, the Columbia and the Ste. Claire. He also was the father of modern ice-breaking technology and was appointed by President Theodore Roosevelt to revise the standards for construction and operation of steamboats throughout the United States. Put simply, in the maritime world, Kirby was a very, very big deal.

And the Greater Buffalo would be a very, very big deal in its own right.

She could carry 2,127 passengers, and was equipped with 625 staterooms. It took some 275 officers and crew to run her. Had a car? No problem: She could carry 103 vehicles on her main deck.

Something to brag about

For those in a hurry, the smoke-belching Greater Buffalo featured three-cylinder inclined compound paddle engines — the most powerful paddle engines ever built. They propelled the vessel through the Great Lakes at 21 knots (about 24 miles per hour).

As for comfort and decorative effects, the parlors, lounges and 625 staterooms were “the last word in marine architecture, and the palatial furnishings are rich and attractive and in good taste,” the ad continued. It also featured fancy technology, for its time, such as distilled drinking water and “washed and cooled air.” The dining room could seat 375 people, and satisfied “appetites sharped by brisk lake breezes” with “fish fresh from the cold depths of the Great Lakes themselves,” a D&C brochure said. You could get an a la carte breakfast or bedtime snack, and there was booze available to calm nerves unused to being on open water.

Passengers were treated to the scenic views along the trip through large windows. And it was a sight not to be missed, as a D&C ad promised: “Twilight on the lake posses a magic all its own. Then a host of stars twinkle in the heavens and the waters reflect in the blue, diamond-studded vault above. A brisk walk on deck or a siesta in a great easy chair, with a cigar and congenial companions, makes the ride memorable for its friendly intimacy. Night falls, and then a large, comfortable stateroom welcomes the tired traveler.”

As for safety, the boat was as sturdy as they came in that age. Fire on the open waters, far from fireboats and rescue, was a major concern. The Greater Buffalo was armed with an automatic fire alarm system, safety fire walls and “a complete sprinkler system, which includes every room on the boat, and is found on no other ship afloat,” D&C assured in an ad. The hull was all steel, double-bottomed divided into 16 water-tight compartments, just in case the vessel ran aground or struck a rock — or another ship. A watchman patrolled day and night, just in case.

The ship line usually catered to more upper-class patrons, ““office people, doctors, lawyers,” recalled Detroiter Frederick E. Weber, now in his late 80s. He worked for D&C as a baggage handler. “Sometimes baseball teams would take the boats. Other times, it would be big bands making their way from Detroit to Cleveland and sometimes to Cedar Point, ” he said. “The trains were faster,” Weber said. “But the boats were restful.”

The most expensive room was $15 (about $200 today), and was outfitted with twin beds, a private toilet, shower, bath tub and couch, not to mention an outdoor balcony.

From about 1908 until 1953, the D&C ships lined the Detroit riverfront between Third and Wayne, known today as Washington Boulevard. For nearly four decades in Detroit, this bustling span of waterfront was one of the more dynamic parts of the city and a major Detroit transportation hub. During the D&C era, it was estimated that ten million people embarked on D&C trips, the Detroit News wrote in 1953. Trains would steam into town at the nearby Michigan Central Railroad Depot at Jefferson Avenue and Third Street. A short walk away, rail passengers could then transfer to a steamer at the Union Depot. The Wayne Hotel along this stretch of the river was itself a beacon, drawing visitors to Detroit with its famous baths and steamship docks offering cruises to Belle Isle.

This buzzing transportation hub also featured the lavish Wayne Gardens and Pavilion, an auditorium, a concert hall and a cabaret. In a normal “good season,” the D&C line carried 400,000 passengers, and “hundreds of thousands of others danced, dined or skated in the Gardens and the adjoining pavilion before World War I — or watched Detroit’s early auto shows there,” the News wrote in 1953.

Newlyweds would often stay at the Wayne Hotel, enjoy the sights, and then sail away on their honeymoons, making their way to Niagara Falls via Buffalo, with the line throwing a carnival-like send-off for the brides and grooms. Other D&C travelers took day trips or lake cruises up to watch the annual Port Huron to Mackinac sailboat race or chartered group excursions.

A change in fortunes

In 1931, the News exalted D&C as “one of the most important passenger and package freight lines operating upon the inland waters of the United States.” But things started to slow down at the foot of Third. With the rise of the automobile, many travelers opted to take their trips into their own hands and hit the road—even before freeways paved the way. The Michigan Central Railroad had pulled up stakes and left the area for Corktown, building the massive Michigan Central Station that today stands abandoned. Business slowed to a crawl for the old Wayne Hotel, and its doors were soon shuttered. The D&C ships were the only attraction luring people down to the old hub, and even then, their numbers were few. As more cars rolled off Detroit’s assembly lines and more Americans got behind the wheel, the D&C scaled back the number of its runs; others were canceled altogether. The sun had set on the golden age of passenger steamers on the Great Lakes.

D&C managed to stay afloat through the Great Depression, though it lost more than $2.8 million from 1930 to 1935 (about $42 million when adjusted for inflation). The Greater Detroit and Greater Buffalo were laid up — there simply weren’t enough paying customers to justify running such huge vessels. D&C continued to operate at a loss of hundreds of thousands of dollars a year into the early 1940s, including $654,809 in 1938 (about $9.5 million today). Further compounding the company’s problems were a series of union disputes and strikes over pay and layoffs. The rationing of gasoline during World War II ended up giving the company a little boost as more people relied on the steamers for their vacation getaways. But while the war gave, it also took away.

After the Japanese bombed Pearl Harbor on Dec. 7, 1941, the United States was short on aircraft carriers and needed vessels that were huge — and it needed them fast. This spurred the U.S. Navy to requisition the Greater Buffalo in 1942 and turn it into the training aircraft carrier USS Sable. Losing the ship unbalanced the fleet, adding logistical problems with routes.

The Navy also took the slightly smaller SS Seeandbee from one of D&C's rivals, the Cleveland & Buffalo Transit Co. The Seeandbee was also older than the Greater Buffalo, having made her maiden voyage June 19, 1913. It was 500 - about 35 feet shorter than the Buffalo - and had 510 staterooms. The side-wheeler, which paddled along at about 22 miles per hour, was renamed the USS Wolverine.

The pair of luxury-liners-turned-aircraft-carriers became part of what was known as the "Great Lakes Navy."

The vessels' cabins and superstructure were removed down to the main decks and used as training ships. More than 17,000 pilots were trained, including future President George Bush.

After the war ended in 1945, both the Sable and the Wolverine were decommissioned. The Sable was sold for scrap in July 1948 and broken up by the H.H. Bunche Co. 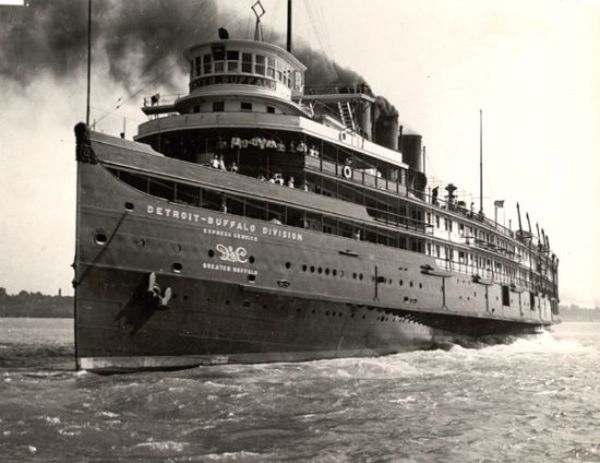